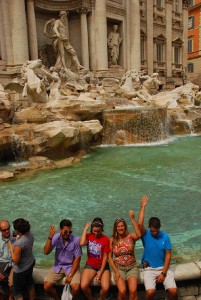 In 1732, Pope Clement XII commissioned Nicola Salvi to create a large fountain at the Trevi Square. A previous undertaking to build the fountain after a design by Bernini was halted a century earlier after the death of Pope Urban VIII. Salvi based his theatrical
masterpiece on this design. Construction of the monumental baroque fountain was finally completed in 1762. It’s tradition to toss a couple of coins over your shoulder while you make a wish. Our current family, the Cains, are shown here (minus dad, who was eating his gelato) participating in the custom.