We stayed at the Schmales Haus (Small House) in the Fischerviertel (Fishermen’s Quarter) of Ulm, Germany the other night. It was the second time at this tiny B&B in Ulm’s most picturesque, enjoyable quarter. Host Michael Heide gave up his job selling insurance more than a decade ago to take care of his young children. “I wanted to watch my son grow up, and not in snapshots,” he told us at breakfast. He and his wife sold their new house and moved to this 300-year old one, restoring it and turning it into one of the nicest B&Bs in southern Germany. Not only are the rooms very comfortable with the sound of the fresh water stream outside, but he also makes one heck of a set of scrambled eggs. Anyway, current guests Bob and Betty Whittemore enjoyed their room with the view of the old brick bridge spanning the “Blue River” which courses through the old mill district. Michael is a Harley enthusiast and loves his annual trips to the USA where he rents a hog and cruises the Wild West among other places. He also owns a Harley which he keeps in Ulm. His physician wife also rides a small Sportster but dreams of a “Fay Boy.” A wonderful, warm way to start a new journey around Germany. The Schmales Haus has just three beautiful, comfortable rooms. Breakfast is gourmet and served in a tiny dining room next to rooms 1 and 2. For more information, contact the owner directly at mheide0107@aol.com 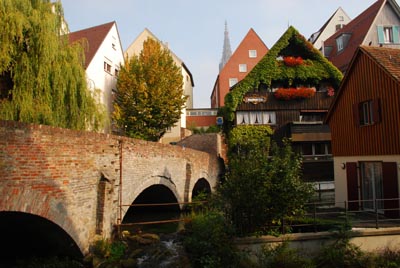 View from one of the rooms