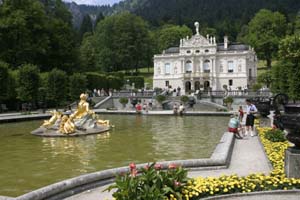 We visited Linderhof Palace yesterday. This was King Ludwig II of Bavaria’s “Hunting Lodge,” although I seriously doubt he did any hunting here. He sounds like a pretty passive guy. Although, one with a very active imagination. Linderhof is one of the three castles that Ludwig had built during his lifetime. It’s the only one that was completely finished and it is the only one where he actually lived for any length of time. The castle sits in beautiful gardens that were inspired by Versailles. Ludwig had a thing about French royalty of the 16th and 17th centuries. The inside of the palace is decorated with portraits of Louis XVI and an equestrian statue of Louis XIV stands in the entry hall. Ludwig liked to be alone, and he had a dining table on an elevator designed so that he could sit and eat and stare at his reflection while courses were raised up to him from the kitchen below. The entire castle is crammed full of precious stones including an amazing Lappis fireplace mantel. Some of the biggest pieces that the porcelain artisans at Meissen ever produced are in his bedroom. This was a guy who seriously was into beauty. Unfortunately, the state of Bavaria did not agree and he was deposed in 1876. His body was found a day after he was forcibly removed from his other castle at Neuschwanstein. Nobody knows exactly what happened to cause his drowning.