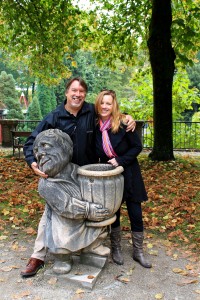 A busier than average year has European Focus Private Tours founder and chief guide James Derheim busier than ever, with just two spots left open in a very active year. Those spots are:

It’s the perfect time to get together with a couple of friends, or family members and start the process today to create the Trip of a Lifetime with European Focus and share those costs which are the same whether we are booked for one person or with five or six. (The vehicle, the fuel, the tolls and other incidentals and of course, the driver and guide’s salary)

James leaves his winter home of Sarasota, FL on April 8 to begin the season in Europe. He is scheduled to return to the USA on October 30. Jenean follows a couple of weeks later, and will be in Europe until at least July 15.

April 16 – 21: Family of three from Australia on a family tree trip to Frankenthal, Germany plus some spots “just for fun,” such as Rothenburg ob der Tauber and Munich

April 22 – 30: Tour with one man researching his roots in three different parts of Germany

April 27 – May 8: Tour started by Jenean and later joined by James, two best friends on the trail of the life and times of Dietrich Bonhoeffer with visits to Berlin, Dresden, Prague, Munich and more.

May 11 – 19: Tour with one woman for family history research purposes in the Stuttgart area of Germany

May 26 – June 8: Tour with a couple in Portugal and Spain (James and Jenean)

June 15 – 30: Tour with a mother and daughter in Italy and Austria and Germany (Jenean)

July 1 – 13: Tour with three persons (three spots remaining) in Germany (Jenean) To inquire about this tour, please contact us today.

July 14 – 26: Tour with father and sons from Normandy to Berlin and to Munich plus other locations (James)

August: Occupied working for a client in the Bayreuth, Germany area (James)

September 20 – October 4: Two couples on a tour in Germany and Austria (James)

October 4 – 23: Tour with a couple in Germany and Austria (James)