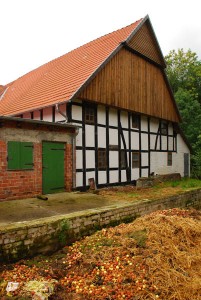 The original farmhouse of the Grote family, where Jane's ancestor Karl August Grote was born.

An unforgettable visit to the Grote ancestral farmstead on September 7th resulted in new connections with cousins in Germany and a wealth of new information for family historian Jane Williamson of Waco, Texas. Jane and her daughter Rachel Hernandez visited Mackenbruch after a long planning process begun in July, 2010 when Jane discovered European Focus Private Tours through a Google search. A little more than a year later and Jane was walking where her ancestors walked, including the original farmhouse and barn where her ancestor Karl August Grote lived before he emigrated to Texas in 1845. He was followed three years later by his brother Friedrich Wilhelm Grote. Brother Johann Heinrich Grote, born in 1811, is the ancestor of the cousins Jane met at the Grote farm in Mackenbruch. 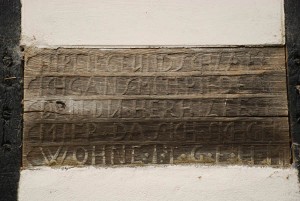 Inscription north side of house and barn

Our visit started out with a drive through the farm property on September 6. Jane had researched the area and had come up with a phone number for the owner of the property, Heinz-Juergen Grote. James Derheim, owner of European Focus, called that number and received no answer, also no answering machine picked up. A few hours later, James received a text message on his cell phone that someone had tried to call him. James called back, and received no answer. A few minutes later, his cell phone rang. James asked (in German, as was the rest of the conversations which followed) “Who’s on the line?” A male voice answered, “Grote.” James hurriedly explained that he was a private ancestral tour guide and that he would like to… “We’re not interested,” said Herr Grote, and disconnected. James called back immediately, and thank goodness Herr Grote picked up. “Just one minute, that’s all I need,” James implored Herr Grote. He explained that he was with a descendant of a Grote emigrant, and could we just come by the farm the following morning around 10 a.m. to take some photos of the exterior of the old barn and house? Herr Grote said this would be fine. 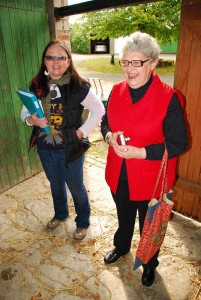 Rachel Hernandez and Jane Williamson enter the barn and walk where their ancestors walked. The stones on the floor are original.

The next morning we stopped at the farm at a few minutes before 10. Herr Grote came out to meet us. He was a bit standoffish at first, but quickly warmed up. It helps that James speaks German, as Herr Grote does not speak English. We not only were shown the religious engraving at the north side of the house above the old bedrooms but we were also granted access to the interior of the barn and shown the various stalls for pigs, horses and cows. (the house was only much later used as a pig sty, after people no longer lived here) Then we met Frau Grote. She invited us over for coffee at 2:30 and a meeting with Herr Grote’s sister, Hanna. “She knows more about the family history,” he said. “And, she speaks English.” Delighted, we agreed and built the rest of our day’s plan around that meeting. 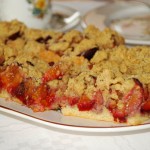 When we returned at 2:30 sharp the gate was open and the friendly dog was waiting to greet us, plus the Grotes. We were shown into the house where Frau Grote had arranged places in their cozy winter garden annex to the house, built recently onto the old house which dates from 1914. Fresh, still warm plum cake was set out, a special treat because today was James’ 47th birthday. Hanna Grote soon arrived, and with help from James (it turned out that Hanna does not speak English) we pored over genealogy records including an amazing “Ahnenpass” created in the 1930s under Hitler’s orders. Each family in Germany had to take their family tree back to at least 1800 to prove they had no Jewish blood. This invaluable record was photographed by James and now Jane has those detailed records. which may help her take her tree back another generation or two. 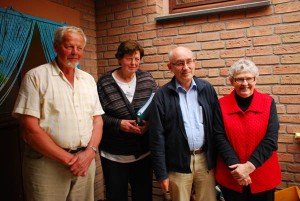 We were joined later in the afternoon by cousins Herbert and Margret Grote, who came from a nearby village. The retired pastor was amazed to learn that Jane’s Grote ancestors were also Methodist pastors in Texas. 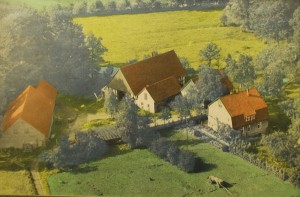 The Grote farm from above, photo handcolored taken in the 1950s. First mention in a document of this farm and the Grote family is 1457.

James learned at the end of our get-together that a local historian had gone around taking photos of farms without permission, and that the published work was full of errors. This rankled the Grotes and that is why Herr Grote had hung up on James the night before. We parted as friends and with many warm memories of our visit to Lippe Detmold.

On October 11, we received this update from Jane Williamson:

Last weekend within a 24-hour period, I received a letter from Hille Grote and emails from Wolfgang Bechtel and Sven Högermann. I was overwhelmed.

To my surprise, Hille said she was sending the letter by air mail because she didn’t know how to use their email but she would get a friend to help her learn. She wrote in English and was extremely gracious as she was on our visit:

“Thank you so much for your nice letter and the photos. The letter arrived on 16th September, the moment when you had already started to return to Texas. We often remember the hours spent with you, your daughter, and James. It was so nice to have you here.”

She also said, “Hanna is ‘infected’ by the research of facts for the genealogical table.” Guess that means Hanna has caught the bug for learning more about family history. They have found another Grote, not my ancestor, but the brother of one of theirs, who was born in 1852 at No. 5 Mackenbruch and arrived in New York in 1881. His destination was Baltimore. I haven’t found him yet in census records.

In response to my request for his lecture notes, Wolfgang emailed not only a copy of his lecture on marriage at the August 3 genealogical society meeting, but also the Power Point slides to accompany the lecture! Now I have the challenge of translating the information.

Högermann answered a question I had about his history of the Grote family on his website.

All of this to say thank you again for your skill in getting us onto the soil of the Grote farm. At our October meeting, my German interest group members were amazed that we had found the ancestral homes and met cousins. They just knew I’d come back empty-handed and disappointed.