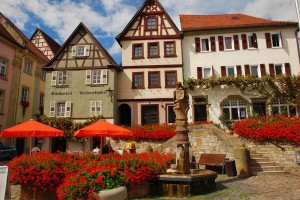 The colors of Bad Wimpfen on an early September afternoon

We traveled today by a combination of the back roads through farmland, hamlets and along the Neckar River to Heidelberg where we’re spending the night. Along the way, we made a stop in Bad Wimpfen for special roasted chicken in a tiny Gasthaus near the “Blue Tower,” a remnant of the medieval fortifications of Bad Wimpfen. 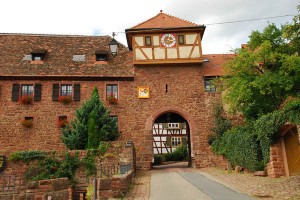 The hilltop hamlet of Dilsberg, and the gate

We then drove along the Neckar and up over the hills to Dilsberg, which our guest Jane Williamson wanted to see because it was a tip from her old college roommate. Further along the Neckar is Heidelberg, a university city since the 1300s with a massive, ruined castle called “the most beautiful heap of rocks in Europe” by Mark Twain, who resided here in the 1870s while on a book and speaking tour. We stayed the night at a historic hotel in the center of all of the action, and tomorrow, we’re heading for ancestral lands in Lippe-Detmold. 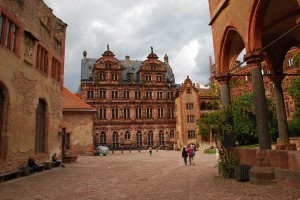 The inner hof of Heidelberg Castle 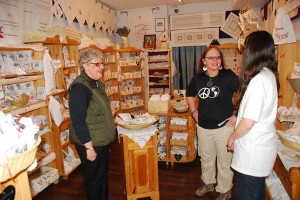