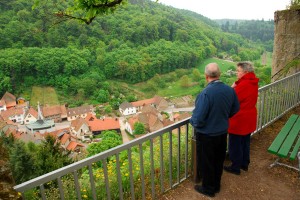 Taking in the vista from Reichenburg Castle

Every family historian should have a castle or two in their genealogy. Virginia (Gini) Packwood now has one, and it’s the former “Reichenburg” fortress located in the hamlet of Falkenstein, located in a high valley on the Donnersberg, Rheinland-Pfalz. We drove there on the 27th on a narrow road which was being worked on and which was clearly marked “Closed at the next village.” Intrepid tour guide James Derheim pressed on, knowing from experience that no road was truly a dead end. There’s always a way around. Sure enough, along came a small SUV with a driver who was also making his way around the closed section of road. “Follow me through the woods,” he said, and that’s just want we did, bumping along on a not too bad gravel path through dark and mysterious forest for a kilometer or so. We came out on the other side in a meadow and he turned right, we turned left to Falkenstein where a massive rock outcropping partially hides the remains of a mighty castle first mentioned in a document in 1134 and finally destroyed in 1794 by the French. To took in the marvelous views on a blustery late afternoon, sun shining through gathering clouds to the west. Gini Packwood knew that her “Harting” ancestor probably had known this scene growing up as a young girl here before she met John William Merkel, the earliest known Merkel ancestor from the hamlet of Standenbuehl over on the other side of “Thunder Mountain.”

Yes, everyone deserves a castle in their genealogical record. 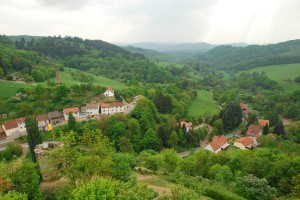 View to the west in direction of Rockenhausen