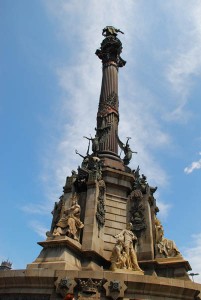 Not only is there a huge statue of Christopher Columbus near the harborfront in Barcelona, but there is a small square near the former royal apartments that also has a connection with the famed explored and so-called discoverer of America. From the top of the huge bronze statue of Columbus, built in 1887-88 in time for the Barcelona Exposition (220,000 kilomgrams of bronze was melted down from old weapons for the column) but there is a quiet square near the cathedral in the Gothic quarter of Barcelona where King Ferdinand and Queen Isabella greeted their explorer after his return from his first voyage to the New World in 1492. We wonder, did they ask him, “Did you bring us any interesting souvenirs?” Perhaps he answered, “Yes, my lady. I brought you a t-shirt saying, “I sailed around the world looking for a passage to India and all I came back with was this stupid t-shirt.” 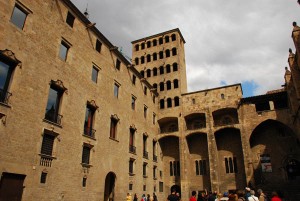 Posted in Spain Tours and tagged columbus in barcelona.