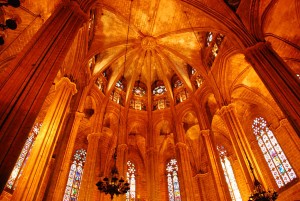 Soaring heights of the choir

The Cathedral of the Holy Cross and Saint Eulalia (Catalan: Catedral de la Santa Creu i Santa Eulàlia, Spanish: Catedral de la Santa Cruz y Santa Eulalia), also known as Barcelona Cathedral, is the Gothic cathedral and seat of the Archbishop of Barcelona, Spain. The cathedral was constructed throughout the 13th to 15th centuries, with the principal work done in the 14th century. 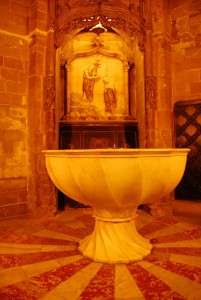 The marble baptismal font was carved in 1433

The cathedral is dedicated to Eulalia of Barcelona, co-patron saint of Barcelona, a young virgin who, according to Catholic tradition, suffered martyrdom during Roman times in the city. One story says that she was exposed naked in the public square and a miraculous snowfall in mid-spring covered her nudity. The enraged Romans put her into a barrel with knives stuck into it and rolled it down a street (according to tradition, the one now called ‘Baixada de Santa Eulalia’). The body of Saint Eulalia is entombed in the cathedral’s crypt. 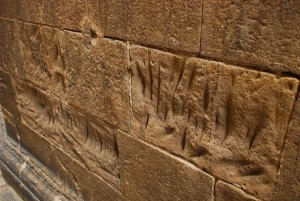 It was a belief in medieval times that if you took powder from a religious building and mixed it in with your grog or stew or whatever, that you would be cured of your ills or your demons or even an upset stomach from eating too much stone powder