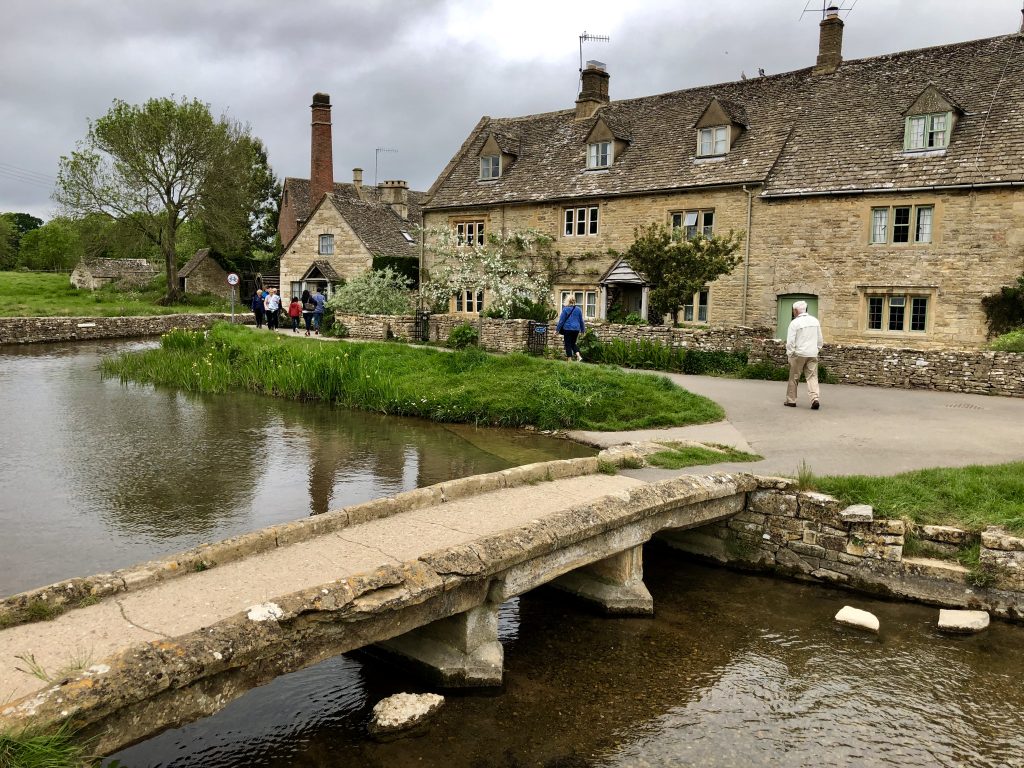 Strolling around Lower Slaughter, a picturesque hamlet in the Cotswolds of England.

“It was the woman on Question Time that really did it for me. She was so familiar. There is someone like her in every queue, every coffee shop, outside every school in every parish council in the country. Middle-aged, middle-class, middle-brow, over-made-up, with her National Health face and weatherproof English expression of hurt righteousness, she’s Britannia’s mother-in-law. The camera closed in on her and she shouted: “All I want is my country back. Give me my country back.”

It was a heartfelt cry of real distress and the rest of the audience erupted in sympathetic applause, but I thought: “Back from what? Back from where?”

Wanting the country back is the constant mantra of all the outies. Farage slurs it, Gove insinuates it. Of course I know what they mean. We all know what they mean. They mean back from Johnny Foreigner, back from the brink, back from the future, back-to-back, back to bosky hedges and dry stone walls and country lanes and church bells and warm beer and skittles and football rattles and cheery banter and clogs on cobbles. Back to vicars-and-tarts parties and Carry On fart jokes, back to Elgar and fudge and proper weather and herbaceous borders and cars called Morris. Back to victoria sponge and 22 yards to a wicket and 15 hands to a horse and 3ft to a yard and four fingers in a Kit Kat, back to gooseberries not avocados, back to deference and respect, to make do and mend and smiling bravely and biting your lip and suffering in silence and patronising foreigners with pity.

We all know what “getting our country back” means. It’s snorting a line of the most pernicious and debilitating Little English drug, nostalgia. The warm, crumbly, honey-coloured, collective “yesterday” with its fond belief that everything was better back then, that Britain (England, really) is a worse place now than it was at some foggy point in the past where we achieved peak Blighty. It’s the knowledge that the best of us have been and gone, that nothing we can build will be as lovely as a National Trust Georgian country house, no art will be as good as a Turner, no poem as wonderful as If, no writer a touch on Shakespeare or Dickens, nothing will grow as lovely as a cottage garden, no hero greater than Nelson, no politician better than Churchill, no view more throat-catching than the White Cliffs and that we will never manufacture anything as great as a Rolls-Royce or Flying Scotsman again.

The dream of Brexit isn’t that we might be able to make a brighter, new, energetic tomorrow, it’s a desire to shuffle back to a regret-curdled inward-looking yesterday. In the Brexit fantasy, the best we can hope for is to kick out all the work-all-hours foreigners and become caretakers to our own past in this self-congratulatory island of moaning and pomposity.

And if you think that’s an exaggeration of the Brexit position, then just listen to the language they use: “We are a nation of inventors and entrepreneurs, we want to put the great back in Britain, the great engineers, the great manufacturers.” This is all the expression of a sentimental nostalgia. In the Brexiteer’s mind’s eye is the old Pathé newsreel of Donald Campbell, of John Logie Baird with his television, Barnes Wallis and his bouncing bomb, and Robert Baden-Powell inventing boy scouts in his shed.

All we need, their argument goes, is to be free of the humourless Germans and spoilsport French and all their collective liberalism and reality. There is a concomitant hope that if we manage to back out of Europe, then we’ll get back to the bowler-hatted 1950s and the Commonwealth will hold pageants, fireworks displays and beg to be back in the Queen Empress’s good books again. Then New Zealand will sacrifice a thousand lambs, Ghana will ask if it can go back to being called the Gold Coast and Britain will resume hand-making Land Rovers and top hats and Sheffield plate teapots.

There is a reason that most of the people who want to leave the EU are old while those who want to remain are young: it’s because the young aren’t infected with Bisto nostalgia. They don’t recognise half the stuff I’ve mentioned here. They’ve grown up in the EU and at worst it’s been neutral for them.

The under-thirties want to be part of things, not aloof from them. They’re about being joined-up and counted. I imagine a phrase most outies identify with is “women’s liberation has gone too far”. Everything has gone too far for them, from political correctness — well, that’s gone mad, hasn’t it? — to health and safety and gender-neutral lavatories. Those oldies, they don’t know if they’re coming or going, what with those newfangled mobile phones and kids on Tinder and Grindr. What happened to meeting Miss Joan Hunter Dunn at the tennis club? And don’t get them started on electric hand dryers, or something unrecognised in the bagging area, or Indian call centres, or the impertinent computer asking for a password that has both capitals and little letters and numbers and more than eight digits.

We listen to the Brexit lot talk about the trade deals they’re going to make with Europe after we leave, and the blithe insouciance that what they’re offering instead of EU membership is a divorce where you can still have sex with your ex. They reckon they can get out of the marriage, keep the house, not pay alimony, take the kids out of school, stop the in-laws going to the doctor, get strict with the visiting rights, but, you know, still get a shag at the weekend and, obviously, see other people on the side.

Really, that’s their best offer? That’s the plan? To swagger into Brussels with Union Jack pants on and say: “ ’Ello luv, you’re looking nice today. Would you like some?”

When the rest of us ask how that’s really going to work, leavers reply, with Terry-Thomas smirks, that “they’re going to still really fancy us, honest, they’re gagging for us. Possibly not Merkel, but the bosses of Mercedes and those French vintners and cheesemakers, they can’t get enough of old John Bull. Of course they’re going to want to go on making the free market with two backs after we’ve got the decree nisi. Makes sense, doesn’t it?”

Have no doubt, this is a divorce. It’s not just business, it’s not going to be all reason and goodwill. Like all divorces, leaving Europe would be ugly and mean and hurtful, and it would lead to a great deal of poisonous xenophobia and racism, all the niggling personal prejudice that dumped, betrayed and thwarted people are prey to. And the racism and prejudice are, of course, weak points for us. The tortuous renegotiation with lawyers and courts will be bitter and vengeful, because divorces always are and, just in passing, this sovereignty thing we’re supposed to want back so badly, like Frodo’s ring, has nothing to do with you or me. We won’t notice it coming back, because we didn’t notice not having it in the first place.

You won’t wake up on June 24 and think: “Oh my word, my arthritis has gone! My teeth are suddenly whiter! Magically, I seem to know how to make a soufflé and I’m buff with the power of sovereignty.” This is something only politicians care about; it makes not a jot of difference to you or me if the Supreme Court is a bunch of strangely out-of-touch old gits in wigs in Westminster or a load of strangely out-of-touch old gits without wigs in Luxembourg. What matters is that we have as many judges as possible on the side of personal freedom.

Personally, I see nothing about our legislators in the UK that makes me feel I can confidently give them more power. The more checks and balances politicians have, the better for the rest of us. You can’t have too many wise heads and different opinions. If you’re really worried about red tape, by the way, it’s not just a European problem. We’re perfectly capable of coming up with our own rules and regulations and we have no shortage of jobsworths. Red tape may be annoying, but it is also there to protect your and my family from being lied to, poisoned and cheated.

The first “X” I ever put on a voting slip was to say yes to the EU. The first referendum was when I was 20 years old. This one will be in the week of my 62nd birthday. For nearly all my adult life, there hasn’t been a day when I haven’t been pleased and proud to be part of this great collective. If you ask me for my nationality, the truth is I feel more European than anything else. I am part of this culture, this European civilisation. I can walk into any gallery on our continent and completely understand the images and the stories on the walls. These people are my people and they have been for thousands of years. I can read books on subjects from Ancient Greece to Dark Ages Scandinavia, from Renaissance Italy to 19th-century France, and I don’t need the context or the landscape explained to me. The music of Europe, from its scales and its instruments to its rhythms and religion, is my music. The Renaissance, the rococo, the Romantics, the impressionists, gothic, baroque, neoclassicism, realism, expressionism, futurism, fauvism, cubism, dada, surrealism, postmodernism and kitsch were all European movements and none of them belongs to a single nation.

No time for walls: the best of Europe, from its music and food to IM Pei’s pyramid at the Louvre, depends on an easy collision of cultures.

There is a reason why the Chinese are making fake Italian handbags and the Italians aren’t making fake Chinese ones. This European culture, without question or argument, is the greatest, most inventive, subtle, profound, beautiful and powerful genius that was ever contrived anywhere by anyone and it belongs to us.

Just look at my day job — food. The change in food culture and pleasure has been enormous since we joined the EU, and that’s no coincidence. What we eat, the ingredients, the recipes, may come from around the world, but it is the collective to and fro of European interests, expertise and imagination that has made it all so very appetising and exciting. The restaurant was a European invention, naturally. The first one in Paris was called The London Bridge.

Culture works and grows through the constant warp and weft of creators, producers, consumers, intellectuals and instinctive lovers. You can’t dictate or legislate for it, you can just make a place that encourages it and you can truncate it. You can make it harder and more grudging, you can put up barriers and you can build walls, but why on earth would you? This collective culture, this golden civilisation grown on this continent over thousands of years, has made everything we have and everything we are, why would you not want to be part of it?

I understand that if we leave we don’t have to hand back our library ticket for European civilisation, but why would we even think about it? In fact, the only ones who would are those old, philistine scared gits. Look at them, too frightened to join in.”