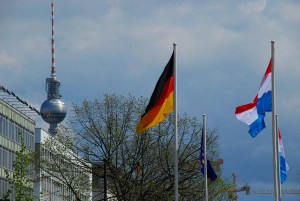 The Pope's Revenge seen from Unter den Linden. Please click for larger view to see the visual effect related to the story

The Berliners have a great sense of humor. You’d have to, to live in a city which has been pummeled to smithereens by war (more than 60% of the city center was left in ruins after 1945) divided and torn apart by the Cold War and then reunited and for the next nearly 22 years, a non-stop construction zone. So it’s no surprise that the Berliners have a nickname for nearly everything in their city. In the case of the massive TV tower, the tallest structure in Germany, the Berliners from the west side of the wall called it from the start, “The Pope’s Revenge.” See, the East German architects who designed it were not really thinking of what effect the rays of the sun would have on its surface. When the sun is shining, a very obvious cross appears, which can be seen for miles and miles. The East German government stance towards religion was that it was not very much encouraged. The Pope, it seems, had the last laugh.