Salzburg, Austria happens to be one of the prettiest small cities on our Southern Germany and Austria itinerary. Called the ‘Rome of the North,’ Salzburg, founded by the Romans, may have lost its Forum but in its place are magnificent statues, fountains, more than one horse bath and 37 churches and one synagogue. 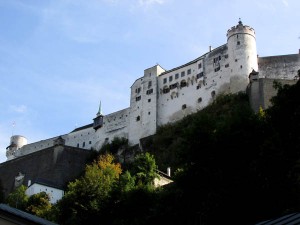 Salzburg’s fortress was built to protect the town and to impose the power of the ruler, a Prince Archbishop who ruled both on earth as well as provided a conduit to heaven

Parking in a tunnel carved out of the volcanic rock and used as a bomb shelter in World War II, we went on a slow amble around the city starting with the flower-filled Mirabell Gardens. The ruler of Salzburg was a Prince Archbishop with dominion over matters both earthly and worldly, and Mirabell was his country estate back when Salzburg was a much smaller place. Country estates for the rich were the places to get away from the odors of the city on a hot summer day (or night) and those who could afford it had more than one rural getaway. 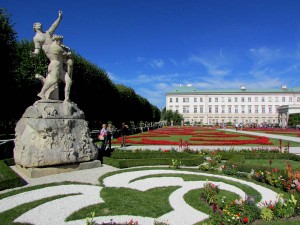 From Mirabell we walked past the house where Salzburg’s most famous son, Wolfgang Amadeus Mozart, lived as an adult between his extensive travels around Europe. Down Steingasse, the city’s oldest lane and still bearing the tank tracks where an amorous GI tried to ram his tank down the narrow street on his way to a rendezvous at the nearby ‘House of Pleasure’ back in 1945. Older marks left by pilgrims in the 15th and 16th centuries still cover one old house’s door, helpful notes letting others know that the owner of the house would provide food or shelter. 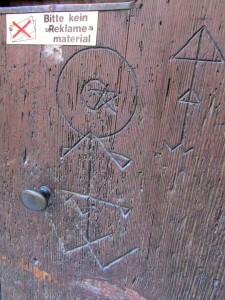 A door with marks from pilgrims, notes to others left behind more than four centuries ago