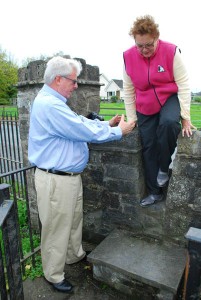 Jim Cooke helps his wife Betsy over a narrow gate into the property of a former monastery outside of Trim, Ireland

Jim and Betsy Cooke arrived in Dublin on October 8 to begin their 8-day tour in Ireland with European Focus. This is Jim and Betsy’s second tour with us since their first in the fall of 2008, which took place in Germany. After their early arrival at Dublin’s International Airport, the morning was spent on rest and relaxation (unlike big bus tours, we don’t believe in pushing our guests to the extreme limits of their endurance on the first day) and then once a good nap had been enjoyed, we drove up into the Wicklow Mountains high above Dublin for lunch at Johnnie Fox’s pub, known as the “Highest Pub in Ireland.” A favorite of ours for many years, the pub also serves some of the best seafood chowder we have encountered in Ireland. After lunch and a look around the rambling pub, we drove the ring road around Dublin and on into the countryside to County Meath and the Boyne River Valley with the small town of Trim our destination. Jim Cooke is an avid photographer and European Focus owner James Derheim, who started the company based on ancestral photography of locations in Europe, knows where to go for the best shots. We wandered around the many ancient ruins of Trim, most of which dates from the 1200s to the late 1500s. In fact, the massive Trim Castle was used extensively in the film “Braveheart,” something the locals still talk about 20 years later.
Ireland’s varied food culture meant that we did not have potatoes and corned beef for dinner, but rather, pastas and excellent wine at “Toscana,” a popular Italian restaurant near the hotel we use in Dun Laoghaire. 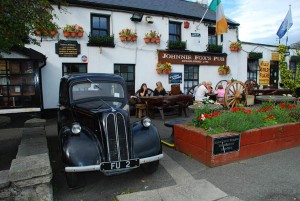 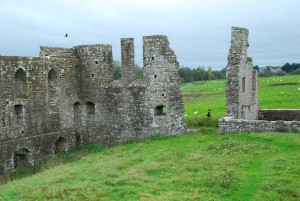 Next, a visit to Counties Cavan and Donegal, which have an ancestral connection. Then on to Tipperary, Cork and Kerry Counties.
Posted in Ireland Tours and tagged castle, fox, ireland, johnnie, pub, trim.