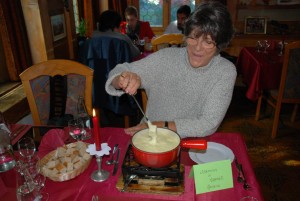 Marianne had her dream fulfilled in the fall of 2014 when she visited the alpine village of Appenzell, Switzerland. James knew that she wanted fondue for lunch, so he arranged it, even though it was not really fondue “season” yet in Switzerland. It was a life highlight for Marianne.

If you want to experience Europe with the founder of European Focus Private Tours, you might want to think about getting in touch with us today. All of May and June are booked and most of September. James has some dates in July and the month of August open, as well as October during the regular season. He will be offering some off-season tours in November and December.

Jenean Derheim has openings in the spring and early summer of 2016.