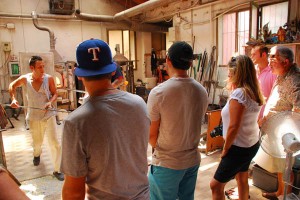 Watching glass being worked on the island of Murano

Dennis and Melissa Cain of Rockwall, Texas wanted to purchase a piece of glass art from the gallery of Murano Vitrum in the San Marco district of Venice. They’d spotted a beautiful piece on a stroll the evening before, and we returned on Friday, July 15 for a closer look. We met salesman Ivan Liguori. The next three hours with Ivan were one of the most exciting and interesting periods of time on the journey around Italy. 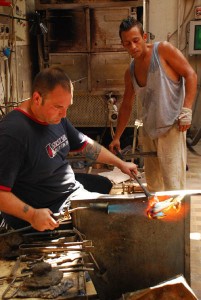 Fabio Tagliapietra puts the finishing touches on an owl

Jim asked Ivan if we could see where the master who created the piece Dennis and Melissa were interested in worked on Murano. This is an island about 15 minutes away from Venice where the glass manufacturers work. The glassworks were moved to Murano hundreds of years ago to prevent fires from devastating the city of Venice. Ivan made a few calls and within minutes, he was closing his shop and we were on the way to Murano. What followed was slightly comical, but certainly not Ivan’s fault. He could not find a taxi. A mega-ship had pulled into Venice and all of the taxis were engaged in taking passengers to and fro. Ivan was a blur of color as we dashed from dock to dock, trying to find an available water taxi. It was near the Doges Palace about half an hour later that we ran into a city official from Murano, also, coincidentally, dressed in a pink shirt like Ivan. The white-haired gentleman “made it happen,” pulling some strings with a private water taxi to take us out to the island. Ivan said to Jim, “it really helps to know people at times like this.” 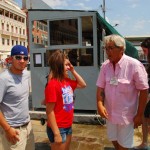 Help from a Murano official 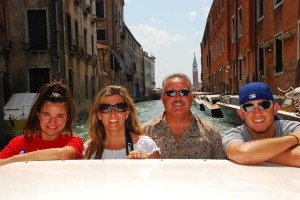 Enjoying the trip to Murano by private water taxi

We couldn’t have agreed more as we enjoyed our slow cruise through the back canals of Venice, through quiet neighborhoods where tourists rarely go. Venice is a city which once had a population of 260,000 busy individuals. It is now less than 60,000, and only half of the houses are occupied. So, not only is Venice “sinking,” but it is also becoming a ghost town. (Although a ghost town with many thousands of tourists keeping its remaining cash drawers full) 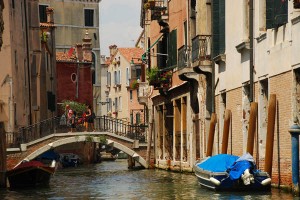 Back channels of Venice

We arrived at the island of Murano and then another small event which made us smile. Ivan couldn’t find the glass works. We couldn’t fault him for this, after all, he’s only been to the island a couple of times in his life, and taking tourists out to Murano is not part of his normal day. He made some calls, asked some locals, and finally after turning left, and right, and left again, we were at the small workshop of master glass artist Fabio Tagliapietra, who graciously allowed us to watch and photograph him working with two apprentices in the blazing heat of his workshop. We learned that these three men work from around 6:30 in the morning til about 2:30 in the afternoon. It’s hot, sweaty work no matter what the conditions outside. In fact, stepping out into the 85 degree heat of Friday would have felt like taking a cool shower after those hours in front of the furnaces.

Fabio created an owl and a fish during the roughly 25 minutes we observed him. Of course, Jenean Derheim fell in love with the owl and wanted to take him home immediately. Lucky for Jim that the owl has to sit in a special cool down oven for a few days before he’s ready for the store shelves. Any imperfections, bubbles and so on, are later disguised through careful uses of spot color and other techniques.

We then visited the factory and showroom of the artist Romano Donà. Although the master was off for the day, we met his brother who opened the showroom for us. Dennis and Melissa chose a gorgeous double flame piece with subtle hues of green and red and gold.
A photo with an iPhone allowed them to compare this piece later with pieces in the studio back in Venice in order to make their final decision.

We had a snack at a bar while we waited for the taxi to come and pick us up. On the way back to the dock nearest Murano Vitrum we had another great tour, seeing part of the old port of Venice, some more quiet and nearly empty neighborhoods and then a wonderful view of the promenade with super yachts parked to the east of the Doges Palace, a fine view of the Doges Palace and the bell tower of San Marco and then to the dock.

We were greeted back at the shop by owner Franco Angi. Franco told Jim that his shop was established by his parents more than 60 years ago. For the last 17 years, he and his brother have maintained two shops in Venice, plus a very upscale web site at www.muranovitrum.com

Deliberations followed, gifts were purchased, and we left with memories of our surprise visit to the island of Murano and with new friends in Venice.

Murano Vitrum
Frezzeria San Marco 1229
Tel: 39. 41 522 5067
Murano Vitrum specializes in high-end authentic Murano glass art and gifts. Nothing from China is every sold or displayed by this fine boutique shop.