A photograph taken in summer, 1992 during the celebrations marking the 50th anniversary of the newspaper I used to work for, the European ‘Stars and Stripes,’ published in Griesheim, Germany. I’m the one in the Navy uniform front left. Those were fantastic times and formed the launch pad for European Focus Private Tours. 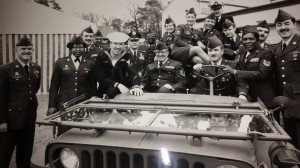 The military staff of the European ‘Stars and Stripes’ in 1992