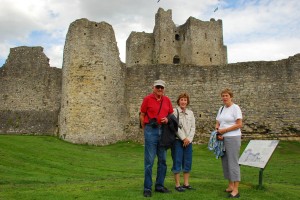 Welcome near arrivals Bob and Paula Leitzell and Audrey Thompson (Paula’s sister) for your third trip with European Focus! We spent the first day exploring the Newgrange passage tomb, built around 3200 BC and recognized as one of the finest examples of ancient tomb building in the world. For lunch, we drove through the countryside to Trim, one of the prettiest small towns in Ireland. Trim Castle was built in the 1200s and was used as the setting for the film “Braveheart,” (this is where William Wallace was drawn and quartered) as the city of York, England. Locals still talk about the film and the stars as if it just happened yesterday. The peaceful Boyne River flows through Trim. It wasn’t so peaceful around here in 1690, when the “Battle of the Boyne” took place near here, a decisive battle between William of Orange and James II over control of the British Empire. 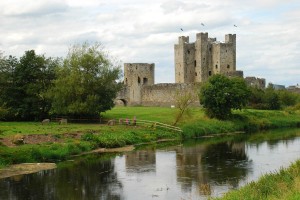 The next week and a half will find us exploring more of Irish history and sights. Come along via this blog.
Posted in Ireland Tours and tagged county meath, ireland, trim.