September 14 – from a visit here on September 9 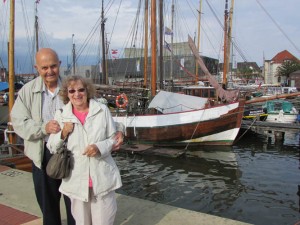 Many of Ken Temples ancestors left from the port of Bremerhaven, Germany.

We visited the Bremerhaven German Emigration Museum recently as part of Ken and Gloria Temple’s 17-day exploration of ancestral villages and towns and sightseeing around Germany. The museum was opened in 2002 and since then, has improved its presentation dramatically with a fascinating look into the difficult and uncomfortable conditions endured by those who made the long crossing over the Atlantic Ocean to start their new lives in America.

The museum is located along the so-called ‘new harbor,’ which opened in 1847. It is commonly thought by genealogists that people left from Bremen. No so. Bremerhaven was always the port for the long haul ships. Bremen ships went to England or other nearby ports. 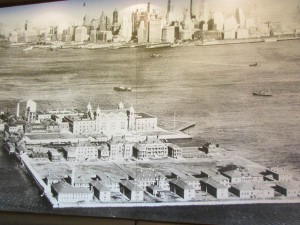 Ellis Island in New York Harbor circa 1935, a photograph in the lobby of the German Emigration Museum