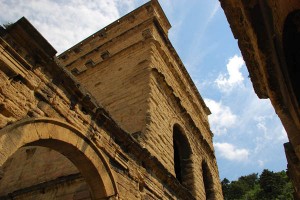 The theater of Orange

The Celtic settlement of Arausio (cf. the local Celtic water god Arausio), existed on the site; a major battle, which is generally known as the Battle of Arausio, was fought in 105 BC between two Roman armies and the Cimbri and Teutones tribes.

Arausio was refounded in 35 BC and settled by veterans of the Second Gallica Roman legion as Colonia Julia Firma Secundanorum Arausio in full, “the Julian colony of Arausio established by the soldiers of the second legion”.

Roman Arausio covered an area of some 170 acres and was well endowed with civic monuments – as well as the theater and arch, it had a monumental temple complex and a forum. It was the capital of a wide area of northern Provence, which was parceled into lots for the Roman colonists. 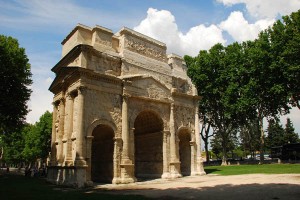 The town prospered, though it was sacked by the Visigoths in 412. It became a bishopric in the 4th century, and the hill fort of the Celtic Cavares was renamed for Saint Eutrope, the first bishop of Saintes. In 441 and 529, Orange hosted two synods: the latter was of importance in condemning the Pelagian heresy. The sovereign Carolingian counts of Orange had their origin in the 8th century, and the fief passed into the family of the lords of Baux. The Baux counts of Orange became fully independent with the breakup of the Kingdom of Arles after 1033. In 1163 Orange was raised to a minor principality, as a fief of the Holy Roman Empire.
Posted in Europe Tours, France Tours and tagged orange france provence.