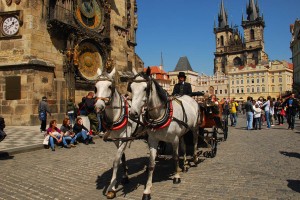 Cilp-clopping out of the market square past the Astrological Clock

Prague – a city undisturbed by the wreckage of World War II, asleep during most of the years under Communism and just “recently” reawakened in the late 1980s is now hosts to zillions (it seems) of tourists who come to admire its fabulous architecture, history and alas, sometimes indifferent service for the most part and what’s really a shame, terrible “Authentic Bohemian Recipes” served alongside Chinese and Italian food. OK, back to the good stuff. 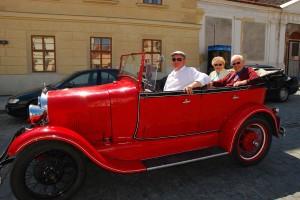 Prague is a city that is almost indescribably beautiful. The Hradcany (Castle) hill, the old town quarter around the town hall and the “Lesser Town” developed under the guidance of Charles IV in the 14th century provides the camera buff with a hundred thousand photo opportunities during a visit to this city where the sun seems to always shine. At least, it did for us during our three days here in May. 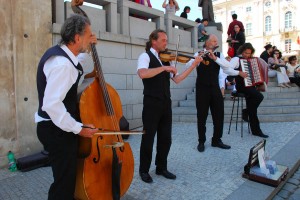 And at night, my oh my. A stroll across the Charles Bridge, standing since the middle of the 1300s, is a must for anyone who has even a tiny bit of romance left in their heart. Why, we even witnessed a young couple mid-bridge, fellow on his knees, astonished girlfriend standing there as he stammered out his proposal. We think she accepted, at least by the kisses he received. And yes, there was a ring.