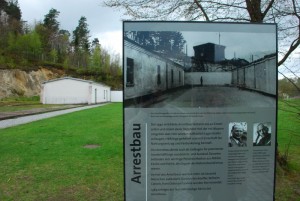 We just finished one of our most interesting tours of our career. Two good friends, Dan and Roy, spent nearly two weeks with Jenean and James Derheim following the life and times of Pastor Dietrich Bonhoeffer, who was killed by the SS at the Flossenbuerg Concentration Camp in early April, 1945 just ten days before the camp was liberated by the US Army.

Dan and Roy have spent years researching the life of this influential writer, thinker and humanist. Born in Breslau (now Wroclaw, Poland) Bonhoeffer spent years touring the world including England and America where he is also remembered. 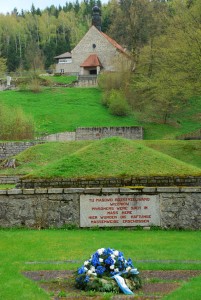 Ash and bone heap and the chapel, built in 1946

But it was his work in his native Germany against the tyranny of the Nazi regime which ultimately led to his arrest and his execution. He was hung at the Flossenbuerg Camp along with conspirators involved in the failed July, 1944 attempt to kill Adolf Hitler by briefcase bomb at his “Wolf’s Lair” camp in present-day Poland. This attempt was featured in the recent Tom Cruise film “Valkyrie.”

Starting in Berlin on April 27, Dan and Roy visited Bonhoeffer sites over three days and nights where he studied, where he preached and where he wrote. We then visited Dresden, one of Germany’s most beautiful cities, on our way to Wroclaw for an overnight to see the place where Bonhoeffer was born (now a private residence) and a memorial statue near the heart of the medieval city center.

From Wroclaw we spent two nights in Prague, sightseeing. After Prague, we spent a night in Regensburg. No Bonhoeffer connection there, but a family connection for Roy as his uncle lives there.

From Regensburg we drove to the area near Ettal for two nights. It was at the Ettal Monastery that Bonhoeffer spent several months in 1941-42 writing one of his most influential books, “Ethics.” We were shown part of the monastery by a priest who showed us the plaque recalling Bonhoeffer’s stay.

European Focus specializes in trips which are custom-designed and tailored to the individual’s interests. We enjoyed this trip immensely, learning much about a man who did his best to fight an evil system resulting in the deaths of more than 50 million people. 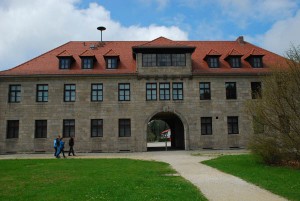