We visited the Normandy battlefields, the American Cemetery above Omaha Beach and the German fortified spur of land known as Pointe-du-Hoc a few days ago. The experience resonates today, the 68th anniversary of the D-Day landings which set in motion the final defeat of Adolf Hitler’s Evil Empire. 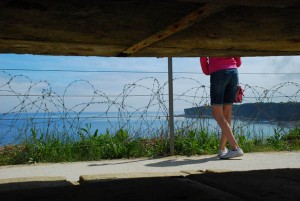 The view from a turret on land's end at Pointe-du-Hoc shows a view through barbed wire to Omaha Beach in the distance. The gunners here could lay down withering fire on both Omaha and Utah beaches.

The landscape at Pointe-du-Hoc is still pockmarked with huge craters from heavy bombing on the night of June 5th and in the early morning hours of June 6th. Then, soldiers landed on the beach, 40 minutes late because of weather conditions, and undertook the difficult job of scaling the steep cliffs in order to disable the guns which could fire on both Utah and Omaha Beaches, both landing sites for the invasion which was to come. The perfect timing of the bombing and the landing didn’t exactly work out that way. The Germans had enough time to come out of their daze as a result of the bombing in order to fire down on the helpless climbers. 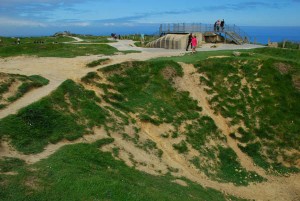 Out of more than 200 brave soldiers, only 90 made it to the top. When they got there, they found that the big guns had been removed. In their place, wooden planks covered with camouflage netting. 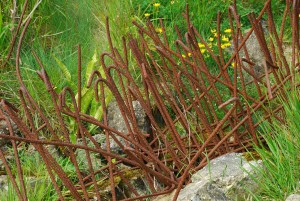 The blasted concrete bunkers, remains of gun turrets and exposed rebar is a reminder that Hitler’s forces were dug in to stay, and that these immense fortifications were created to last and endure several invasions. Deep holes caused by Allied bombs tell a different story of the determination of the civilized world to rid Europe of the twisted Nazi regime. The nearby cemetery above Omaha Beach reminds us of the terrible price paid in blood and youth for that victory, which was to come 11 months later with Hitler’s cowardly suicide in his bunker beneath destroyed Berlin and Germany’s total surrender. 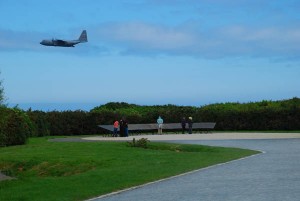 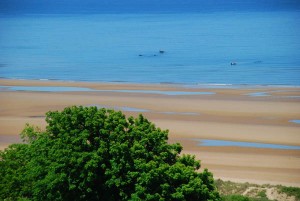 It is difficult to imagine the carnage and destruction this quiet beach witnessed nearly seven decades ago. Omaha Beach seen from the cemetery above.