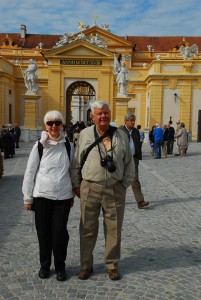 Our guests Art and Carol at the entrance to Melk Abbey during their September 21 – October 6 private tour in Europe.

Melk Abbey or Stift Melk is an Austrian Benedictine abbey, and one of the world’s most famous monastic sites. It is located above the town of Melk on a rocky outcrop overlooking the river Danube in Lower Austria, adjoining the Wachau valley.

The abbey was founded in 1089 when Leopold II, Margrave of Austria gave one of his castles to Benedictine monks from Lambach Abbey. A monastic school, the Stiftsgymnasium Melk, was founded in the 12th century, and the monastic library soon became renowned for its extensive manuscript collection. The monastery’s scriptorium was also a major site for the production of manuscripts. In the 15th century the abbey became the centre of the Melk Reform movement which reinvigorated the monastic life of Austria and Southern Germany. 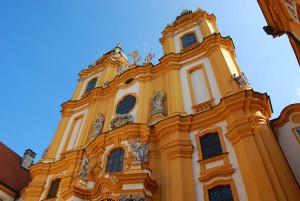 The west facade of the church

Today’s impressive Baroque abbey was built between 1702 and 1736 to designs by Jakob Prandtauer. Particularly noteworthy is the abbey church with frescos by Johann Michael Rottmayr and the impressive library with countless medieval manuscripts, including a famed collection of musical manuscripts and frescos by Paul Troger.

Due to its fame and academic stature, Melk managed to escape dissolution under Emperor Joseph II when many other Austrian abbeys were seized and dissolved between 1780 and 1790. The abbey managed to survive other threats to its existence during the Napoleonic Wars, and also in the period following the Nazi Anschluss that took control of Austria in 1938, when the school and a large part of the abbey were confiscated by the state. 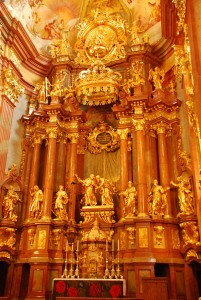 The interior of the abbey church is a spectacular display of gold and color. This view shows the high altar.

We visited Melk Abbey while en route between Berchtesgaden and the Wachau Valley, on the Donau (Danube) River in September. To experience Europe’s glorious past at your own pace, ask us about a private tour for just you and your spouse, partner or family or friends today. 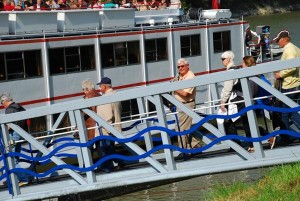 A great way to wrap up a visit to Melk Abbey is to board a cruise from Melk to Krems.