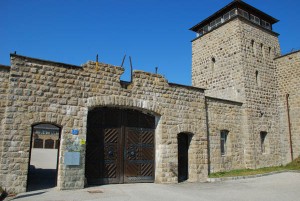 For more than 130,000 prisoners, entry through this gate into the Mauthausen work camp was a painful one-way journey.

There was a time when Germany was ruled not by men or women, but by monsters. The concentration camp on a hilltop near Mauthausen, Austria is testament to that fact.

During Hitler’s “Thousand Year Reich,” which lasted from 1933 – 1945, millions of people were brutally murdered by a regime intent on ridding Europe (and probably later, the world) of entire classes of people. Jews, Slavs, Sinti and Roma (aka “Gypsies) and homosexuals, Jehovah’s Witnesses and many others were targeted for extermination under the Nazis “Final Solution.” The camp at Mauthausen, which is mostly intact all of these years after the allies liberated it, stands as a silent and ghostly reminder of what can happen to an otherwise intelligent, inventive people when beasts are in charge. 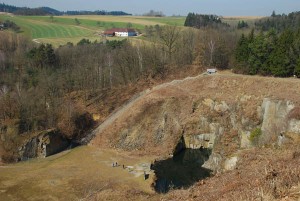 A visit to this memorial site, preserved since shortly after it was liberated by the U.S. Third Army, is necessary for those who wish to try and understand the absolute horror, suffering and ultimately death of more than 130,000 people from many nations including the USA on this cold, windswept hill top. Built at the western edge of an existing stone quarry, it was the Nazis plan to use stones from this quarry and slave labor to provide Albert Speer with the building material necessary to carry out his grand plans for the monumental, bombastic structures of the new Reich. In fact nearby Linz, the birthplace of Hitler, was planned as a retirement community for “Der Fuehrer” after the war. His actual retirement for Adolf the Coward was by self-inflicted gunshot to the temple in a dank bunker under destroyed Berlin.

Mauthausen is permeated by a sense of loneliness, despair and pain. You’d have to be a robot not to feel it. Walking the “Stairs of Death,” to the deep quarry below the camp one can still hear the cries of anguish in the whisper of the wind from the surrounding trees. Walking through the empty barracks, you can still feel the energy of thousands who slept their last few hours here. In the gas chamber, the sense of horror intensifies as you realize that for many thousands, these walls and these pipes were the last things they saw on earth. A tiny peephole window in the heavy iron door sends chills up your spine as you imagine the scene from the other side as the Zyklon-B invented by the IG Farben company (which still exists) took effect. 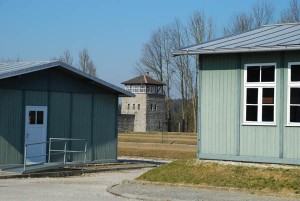 Barracks and a guard tower, preserved as in 1945.

A visit here is not for the faint at heart. The first time I visited and went through the execution chamber where people were shot point-blank in the neck resulted in dizziness and a pain in my stomach which didn’t subside for hours. I wasn’t sure if I could ever return and in fact, the next two times I brought clients here I didn’t go inside the camp, but rather, spent an hour or so in the interpretive center nearby, watching videos of camp survivor’s testimony or reading bios on those who perished there. It was only this most recent visit that I could bring myself to go though the gates, where once a huge Nazi swastika rested under an eagle. That figure was destroyed after the liberation. The camp remains as it was, with the exception of barracks which have been removed. The handful which remain enclose a courtyard where head counts were performed at dawn and at dusk, the end of a brutal day in the quarry and for most, one day closer to death.

After this visit, I rented and watched the movie “Schindler’s List.” It was the first time I’d seen the film since its release in 1993. I was reminded that during my days as a reporter for the “European Stars and Stripes,” I’d accompanied a reporter on an assignment to interview one of Oskar Schindler’s best friends. Schindler, a businessman and opportunist, rescued about 1,200 Jews from certain death by moving them to his hometown in Czechoslovakia near the end of the war as the “Final Solution” was entering its final, ramped up phase of disposal of human life. Watching the movie, I thought about the camp at Mauthausen and the hundreds of other camps which were at one time spread out over the entire territory of the Third Reich. I thought about the utter inhumanity of what happened starting in 1933 and lasting twelve horrible years.

A visit to Mauthausen is necessary, yes. But it is hard. 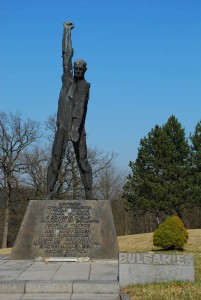 Memorial to the Bulgarians who died here. There are many memorials on the former grounds of the SS barracks.