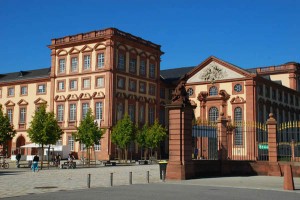 What do the world’s first automobile, the first bicycle and the first tractor have in common? Mannheim! All three were invented in this industrial town on the banks of the rivers Rhein and Neckar in the state of Baden-Wuerttemberg, Germany. Known as “Grid City” the bustling large town was built on the same principle as Manhattan. Instead of the usual outward growth of circles common in medieval towns and cities, Mannheim was planned as a working city and a logical street plan was needed to move materials. Europe’s second largest domestic port is also located here. 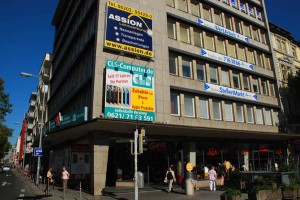 The ancestral house at K1 number 18 was destroyed by bombing in World War II. This modern building stands in its place. There is an excellent bakery on the ground floor. 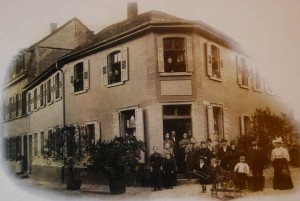 Mannheim was basking under gorgeous fall sunshine when we visited on September 8th. Ancestors of our current guests came from here, having lived in the center of the city during the last half of the 19th century. Sadly, the bombing campaigns of World War II reduced most of Mannheim to rubble and those three ancestral homes were lost, along with 90 percent of the rest of the city and many thousands of its citizens. Because of the utter devastation, it was impossible to rebuild the city center as it had appeared before the war, and so the citizens started over, maintaining the grid plan but erecting all new buildings. Not even the sprawling castle, the largest baroque castle of its kind in Europe, was spared. 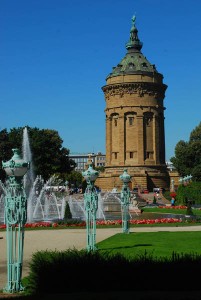