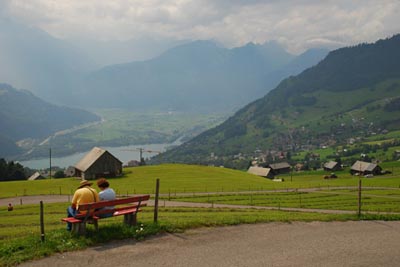 Taking in the view in Heidiland

We had the good luck to catch several farmers way, way up high on the mountainside above the Walensee in the St. Galen district of Switzerland the other day. The sun was shining and the farmers were rushing to bring in the hay before a storm arrived later that day. Shown are guests Bob and Paula Leitzell on the bench with the best view in the valley.

Cut hay is raked into rows and picked up by baler

When ready, the baler emits a fresh, green bale of mountain grass

Another machine picks up the bale, wraps it in plastic and spits it out the back end. The farmer waits to make sure the bale doesn't go rolling down the mountainside!