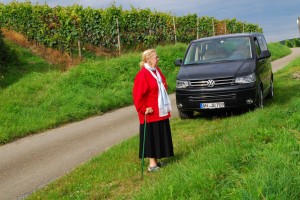 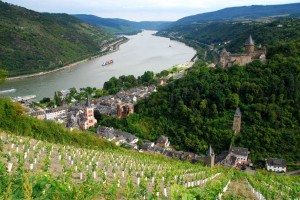 Dolores Petit always wanted to visit her ancestral country of Germany but her husband would not allow it. A member of the French Resistance as a young teen, he harbored hard feelings against not just some Germans but the entire country. When they traveled, they went to see his relatives in France.

So, when her husband John Petit died a year and a half ago, Dolores started planning a trip that she had been waiting basically her entire life to take. She was going to make it with her cousin, Bette. The highlight would be a visit to see cousins in northern Germany near Bremen.

Bette fell ill just a few days before departure and could not make the trip. Dolores came alone, and had the time of her life. How do you wrap up a wonderful week in a country where you love just everything? We thought an afternoon on the beautiful Rhein River between Mainz and Marksburg would be the perfect way to say ‘Auf Wiedersehen’ to Deutschland.

After having a freshly-made sandwich at a bakery near the departure point in Rüdesheim, Dolores boarded the ‘Vater Rhein’ for a two-hour cruise downstream to St. Goarshausen. She passed many castles, hamlets and miles of vineyards along the way. The weather cooperated and she was able to sit at the stern of the vessel, a perfect spot to catch the entire panorama unfolding before her. Her guide, James Derheim (the founder and owner of European Focus Private Tours) was waiting in St. Goarshausen when she arrived just before 4 p.m. We continued the tour along the road up to Marksburg, an impressive medieval castle which is one of only two fortresses on the Rhein to have never been captured, sacked or destroyed in more than 800 years. We turned around and backtracked, taking the ferry at Pfalzgrafenstein to the other side, and then a short drive to Bacharach for dinner. But wait, James had something else to show Dolores. To put a cherry on the top of the trip, he drove her up, up and up some more to a ‘secret’ overlook point higher than even Burg Stahleck, the medieval sentinel which has kept watch over Bacharach for seven centuries. The view is breathtaking and made the perfect ‘period’ at the end of what she said. ‘This was the trip of my life.’ 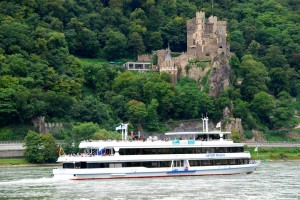 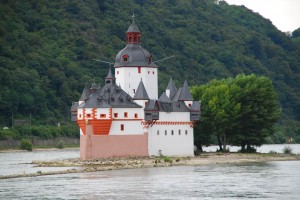 Pfalzgrafenstein has stood since the 1300s. It was never sacked or destroyed. 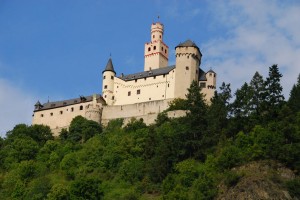 Marksburg has never been destroyed or captured in its more than 800 year history. It stands near Braubach on the northern end of the drive Dolores enjoyed after her cruise.