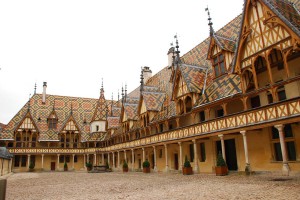 The “Palace of the Poor” was built in the 1400s by wealthy citizens in order to take care of people who had no other place to go. It was state of the art for its time, run by nuns, and exceptionally comfortable and relatively private. We visited the museum in the center of Beaune, Burgundy on our way from Germany into the French Alps.

The Hôtel-Dieu was founded on 4 August 1443, when Burgundy was ruled by Duke Philip the Good. The Hundred Years War had recently been brought to a close by the signing of the Treaty of Arras in 1435. Massacres, however, continued with marauding bands (“écorcheurs”) still roaming the countryside, pillaging and destroying, provoking misery and famine. The majority of the people of Beaune were declared destitute.

Nicolas Rolin, the Duke’s Chancellor, and his wife Guigone de Salins, reacted by deciding to create a hospital and refuge for the poor.

The Hospices de Beaune received the first patient on 1 January 1452. Elderly, disabled and sick people, with orphans, women about to give birth and the destitute have all been uninterruptedly welcomed for treatment and refuge, from the Middle Ages until today.

Over the centuries, the hospital radiated outwards, grouping with similar establishments in the surrounding villages of Pommard, Nolay, Meursault. Many donations – farms, property, woods, works of art and of course vineyards – were made to it, by grateful families and generous benefactors. The institution is one of the best and oldest example of historical, philanthropic, and wine-producing heritage, and has become linked with the economic and cultural life of Burgundy. 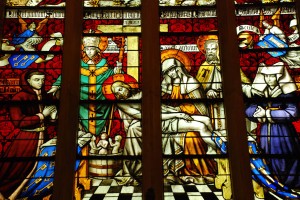 The chapel was integreted into the hospital chamber. Patients could particpate in the mass from their beds.