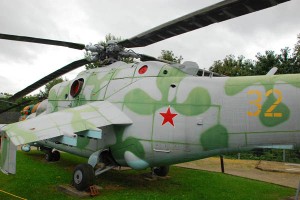 Twenty one years after East and West Germany became one and the museum on the former border near Allendorf has never been busier, according to the man who took our money for the entry and who grew up here, on the Eastern side of the border. ‘People want to come and see what they could not even get close to before,’ Herr Pfeiffer told us. 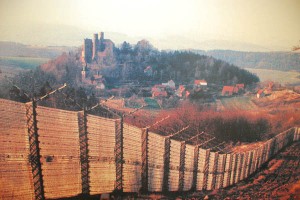 The border near Bad Sooden - Allendorf in the early 1980s.

Exceptionally well put together, the museum features authentic Soviet and East German hardware including helicopters, military recon vehicles and police cars which look like they were built in the 1940s, but actually were built in the 1980s. A series of photo displays tell the story of how Germany was divided into four zones; American, French, British and Soviet. We were touched when a woman approached us and spoke in English about her memories of growing up in a village near Wetzlar, in the American zone. ‘We were lucky to live in the American zone,’ she said. ‘My brother was younger than I, having been born in 1942. All he knew was war, tanks, soldiers, noise. When we saw our first American soldier it was a black man. We were hiding under a wagon and a tank rolled to a stop near us. He was holding out a Hershey’s bar. I was terrified, because I had never seen a black man before or a chocolate bar either! My brother was less afraid. He took the chocolate and we ate it together. I will never forget that day.’ The woman went on to tell us that she gets angry when people who lived in the former DDR (Deutsche Demokratic Republic) wax nostaligic about the ‘good old days.’ She said, ‘those people had nothing, nothing! How can they be sad for a time when they were so poor, and under control every minute of every day?’ 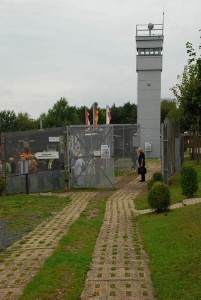 You're being watched. Ostensibly the towers and fences were to keep the Westerners out of the prize and paradise that was East Germany.

We learned much from our encounter with this woman and her husband, together with the displays at this not to be missed museum in the heart of Germany. 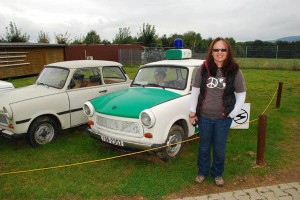 Our guest Rachel Hernandez near a vintage East German police car, a carnival car built in the 1980s but looking much older.