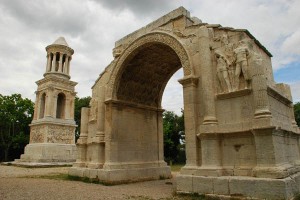 Mausoleum and entrance gate at Glanum

We visited this monument the other day. It is an incredible experience that need at least two hours to enjoy fully.

Glanum was an oppidum, or fortified town, founded by a Celto-Ligurian people called the Salyens in the 6th century B.C. 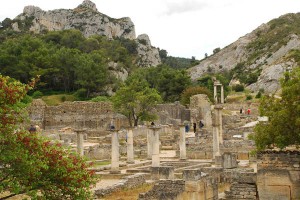 View over the Glanum site, excavated starting in 1921

It was known for the healing power of its spring. It became a Roman city in Provence until its abandonment in 260 A.D.. It is located on the flanks of the Alpilles, a range of mountains in the Bouches-du-Rhône département, about 20 km (12 miles) south of the modern city of Avignon, and a kilometer south of Saint-Rémy-de-Provence. It is particularly known for two well-preserved Roman monuments of the 1st century B.C., known as les Antiques, a mausoleum and a triumphal arch. the oldest one in France, located at the site. 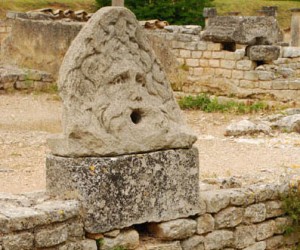 Water to fill the baths once jetted from the mouth of this amazing face, perfectly preserved. 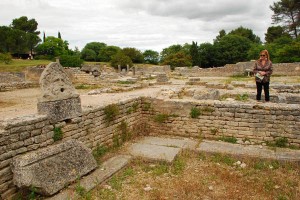 Jenean Derheim gazes in wonder at the old bath complex

Between the 4h and 2nd centuries B.C., the Salyens, the largest of the Celto-Ligurian tribes in Provence, built a rampart of stones on the peaks that surrounded the valley of Notre_Dame-de-Laval, and constructed an oppidum, or town, around the spring in the valley, which was known for it’s healing powers. A shrine was built at the spring to Glanis, a Celtic god. The town grew, and a second wall was built in the 2nd century.

The town had a strong Celtic identity, shown by the names of the residents (Vrittakos, Eporix, Litumaros) by the names of the local gods (Glanis and his companions, the Glanicae, (similar to the Roman Matres); and the goddesses Rosmerta and Epona); by the statues and pottery; by the customs, such as displaying the severed heads of enemies at the city gate; and by the cooking utensils found in the ruins, which showed that the people of Glanis boiled their food in pots, rather than frying it in pans like other Mediterranean tribes. 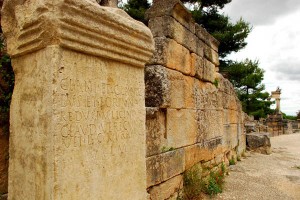 Memorials along the main street

The people of Glanum were in early contact with the Greek colony of Marseille, which had been founded in about 600 B.C. The contact influenced the architecture and art of Glanum- villas were built in the Hellenic style. But by the 2nd century there conflicts and wars between the Salyens and the Greeks of Marseille. The Greeks of Marseille, not having a powerful army, called upon the assistance of their Roman allies. In 125 B.C. the Salyens were defeated by the army of the Roman consul Marcus Fulvius Flaccus, and the following year decisively defeated by C. Sextus Calvinus. Many of the old monuments of Glanum were destroyed, 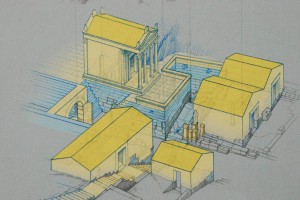 Despite the defeat, the town prospered again, thanks to the attraction of the healing spring. The city produced its own silver coins and built new monuments. The prosperity lasted until 90 B.C. when the Salyens again rebelled against Rome. The rebellion was crushed again, this time by the Consul Caecilius, and the public buildings of Glanum were again destroyed. dismantled, and replaced by more modest structures. 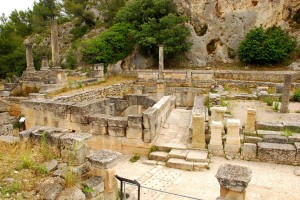 The ruins of the Sacred Springs

In 49 B.C. Julius Caesar captured Marseille, and after a period of destructive civil wars, the Romanization of Provence and Glanum began.
In 27 B.C. the Emperor Augustus created the Roman province of Gallia Narbonensis, and in this province Glanum was given the title of Oppidum Latinum, which gave residents the civil and political status of citizens of Rome. A triumphal arch was built outside the town between 10 and 25 B.C., near the end of the reign of Augustus, the first such arch to be built in Gaul, as well as an impressive mausoleum of the Julii family, both still standing.

In the 1st century B.C., under the Romans, the city built a new forum, temples, and a curved stone arch dam, Glanum Dam, the oldest known dam of its kind and an aqueduct, which supplied water for the fountains and Roman baths in the town.

Glanum was not as prosperous as the Roman colonies of Arles, Avignon and Cavaillon, nor was it fortunate enough to be on the major Roman road of the colony, the Via Domitian, but in the 2nd century A.D. it was wealthy enough to build impressive shrines to the Emperors, to enlarge the forum, and to have extensive baths and other public buildings clad in marble. 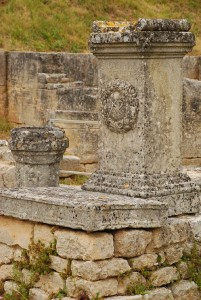 The Votive Altar was from the Greek period. The Goddesses ears are plainly seen on the pillar, letting the person know that their prayers were heard.

Glanum did not survive the collapse of the Roman Empire. The town was overrun and destroyed by the Alamanni in 260 A.D., and was subsequently abandoned, its inhabitants moving a short distance north into the plain to found a city that later was named Saint-Rémy-de-Provence.

After its abandonment Glanum became a source of stone and other building materials for Saint-Remy. Since the Roman system of drains and sewers was not maintained, the ruins were often flooded and covered with mud and sediment. The mausoleum and triumphal arch , together known as “Les Antiques,” were famous, and were visited by King Charles IX, who had the surroundings cleaned up and maintained. Some excavations were made around the monuments as early as the 16th and 17th centuries, finding sculptures and coins, and by the marquis de Lagoy in the Vallons-de-Notre-Dame in the 19th century.

The first systematic excavations began in 1921, directed by the architect of historic monuments, Jules Foremigé. From 1921 until 1941, the archeologist Pierre LeBrun worked on the site, discovering the baths, the basilica, and the residences of the northern town. From 1928 to 1933, Henri Roland (1887–1970) worked on the Iron Age sanctuary, to the south. From 1942 until 1969, Rolland took over the work and excavated the area from the forum to the sanctuary. The objects he discovered are on display today at the hotel de Sade in the Saint-Remy-de-Provence.

New excavation and exploration work began in 1982, devoted mainly to preservation of the site, and to exploring beneath sites already discovered for older works. 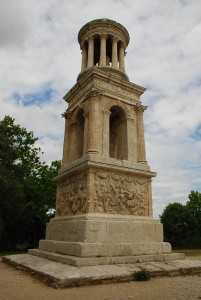