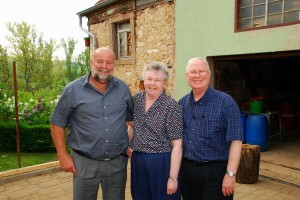 Thanks to genealogy research Roland Geiger, who is headquartered in the lovely town of St. Wendel, Saarland, Bill and Gini Packwood were able to break through one of their “Brick Walls” in genealogy and find the origin of their emigrant ancestor, Johann Merkel, of Standenbuehl and later, Stetten in Donnersbergkreis near Kirchheimbolanden, Germany. 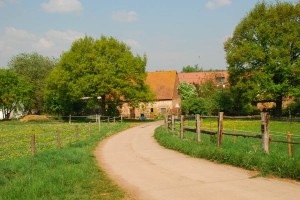 Muensterdreisen Jesuit Monastery on the St. James Way near Standenbuehl

We also learned that the influential and larger Muensterdreisen Jesuit Monastery near Standenbuehl, between it and the neighboring village of Dreisen, was a way station for pilgrims following the Way of St. James to the saint’s burial place in Santiago di Compostela, Spain. This pilgrimage road also crosses the locally known “Kaiserstrasse,” or Emperor’s Way, which cuts through the heart of Standenbuehl. We were told by the village mayor that this road was named for the passing of the emperor through this area in the year 1101 on his way to Mainz. Napoleon also used this road as he made his way to Mainz. The post changing station was a highlight of our visit, where Mayor Mueller showed us where the horses would be changed and any repairs done to the carriage before the journey pressed onward. “An average day would be 60-70 kilometers,” the mayor said. That’s 45 miles over rough, unpaved roads. The mayor himself, a man in his early 60s, remembers when Standenbuehl had a main street made of large cobblestones and not the smooth blacktop of today. 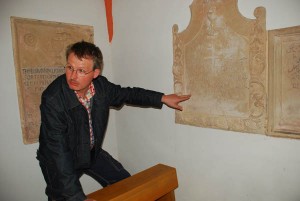 The Packwoods are currently enjoying a trip through their ancestral villages with James Derheim, founder of European Focus. With Roland’s help, we were able to not only visit the ancestral “Stammort,” or origin village, but we were able to pinpoint various farms and other properties owned by the Merkel family prior to their emigration in 1844 to Wisconsin.
Posted in Family History Tours, Germany Tours, Private Tours in Europe, Undiscovered Places and tagged geiger, genealogist, pfalz, rhein, roland, roland geiger genealogy, standenbuehl, standenbuhl.