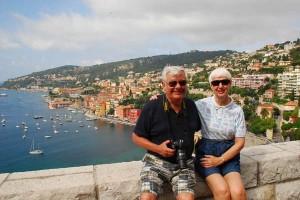 Our guests Art and Carol Casement above Villefranche-sur-Mer

We took a Sunday drive today from our home base in Villefranche-sur-Mer over to Monte Carlo, in Monaco. I think we can all attest to why nearby Menton is 100,000,000 times more charming and likeable than Monte Carlo. The city has lost all sense of itself amongst the many ugly behemoths that crowd the waterfront. 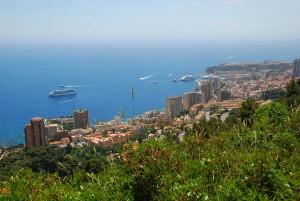 Monte Carlo - you can have it

Huge cruise ships lurk in the harbor, disgorging thousands who descend on the casino and other places to blow their money. Whatever charms Monte Carlo might have had in the 1950s or 60s, old Prince Rainer and Grace Kelly’s days, have long since been buried. 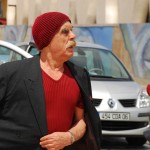 So we left the concrete and glass towers of Monte Carlo behind and continued around the cape to Menton, which has largely escaped ultra-modernization and build up. Graceful old hotels line the beach, which is accessible and which today featured azure water which was extremely fetching (although still cold this early in season). 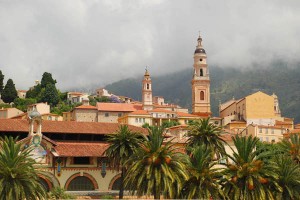 Menton's old town can still be seen and enjoyed


We had no trouble finding a place to park within an easy stroll of a nice seafood restaurant where we had our light lunch with full view of the beach and a perfect sea. 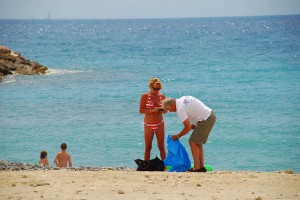 Returning to Villefranche, we took the high road and looked down on Monte Carlo, like Las Vegas, ugly in the daylight and slightly misty with pollution. On to La Turbie, site of a “Trophy” or monument built to celebrate Caesar’s victory over the Gauls in 6/7 BC. The monument has stood there for more than 2,000 years since, although much reduced in size thanks to being used (like most Roman buildings) as quarries for free stone to build other things by those who took over after the fall of the Roman Empire. 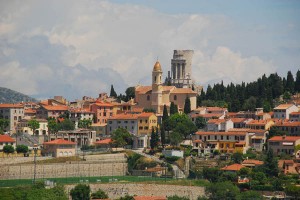 La Turbie and the Roman Trophy

Returning to Villefranche in the early afternoon we took siestas for the rest of the day, watching the activities of the harbor from our rooms, relaxing, taking pictures or just reading. This is the essence of a European Focus Private Tour. We go with the flow, don’t rush around, don’t try to pack too much into any one day if possible. A nice Sunday on the Côte d’ Azur. 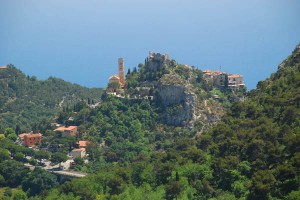 The old town of Eze, not far from Villefranche-sur-Mer