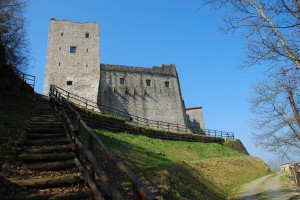 Castle dell'Aquila, Tuscany has been largely restored to its former grandeur.

While on my way to Rome recently to pick up clients, I stopped in northern Tuscany to visit good friends Giulio and Elisabetta Salemme. We stayed the night in a simple but lovely Agriturismo within sight of a massive gray pile of rock which I learned was the Castello dell’Aquila. Giulio offered a visit to the castle the following morning and who can resist the chance to see the inside of a mighty fortress?

View over nearby Gargano, Tuscany from the castle tower

The next day was bright and beautiful without a cloud in the sky. Typical Tuscany. We climbed the hill to the castle in Giulio’s pickup truck. The castle loomed over us, strong walls and high tower etched against the sky. The owner, Gabriela Maria Girardin, came out to meet us. We spent the next two hours roaming the many rooms, chambers, hallways, stairwells and rooms of the castle. It was an incredible experience, especially trying to determine what was rebuilt versus what had been a total ruin before her efforts began. 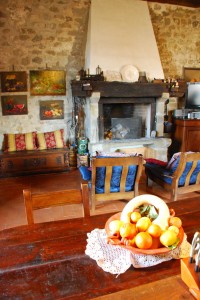 Gabriela has been a collector of fine art for decades. She has sold off much of her collection to pay for the enormous costs of restoring the castle, which basically was looted and pillaged for building materials by the peasants who lived below in the nearby villages after it fell out of use more than 100 years ago. Hey, why go and carve up a piece of stone when there is a huge amount of it up on top of that hill?
That was the fate of many castles all over Europe, when their owners died out or were displaced by whatever petty war they got themselves tangled up in, the locals took their revenge by using their castles as quarries. 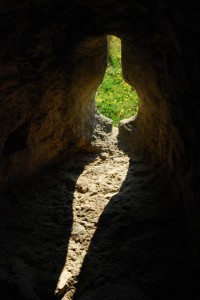 A shooting hole for defense of the castle

The Castello dell’Aquila has nine large bedrooms with full bathroom facilities. There are massive banquet halls with high ceilings. A chapel for weddings. A large courtyard where in summer, dinner parties by candlelight are held. There is, of course, a big cellar and a gigantic attic. Even a skeleton (a reproduction) in a niche in the courtyard. The legend is that the soldier was killed by the arrow from a crossbow. My friend Giulio found such an arrowhead more than 25 years ago when he was exploring the ruins of the castle. That was the reason for our visit. Giulio was going to try and get a local museum to return the arrowhead to the castle, and to the current owner, for her own small on-site museum. 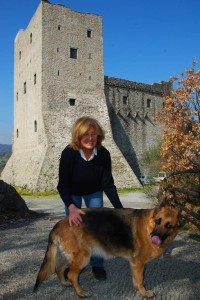 The castle's current owner and her dog

After all of this work and the success of building up the castle as a destination for events, meetings, parties and just romantic getaways, the entire complex is for sale for an undisclosed (at least to us) amount. For details the interested person may contact the owner through European Focus. Just a little tip – it will probably take several chests full of cash to dislodge Gabriela from her lofty perch.
Posted in Italy Tours and tagged casle, for, gargano, italy, sale, tuscany.