Now a beautiful Parador or state-run hotel, we stayed here on May 20

The Lerma Ducal Palace is the palace of the dukes of Lerma in Lerma in Spain, occupying the whole of one side of the city’s Plaza. Originally it had immense gardens below it, on the banks of the river, with fountains, stately homes and seven chapels, of which one (Cristo) remains. All documents relating to its construction have been conserved. A 17th century work, building started in 1601 under commission from Francisco Gómez de Sandoval y Rojas, Duke of Lerma. Its architect was Francisco de Mora and is it is considered de Mora’s masterwork and one of the finest buildings of that era. 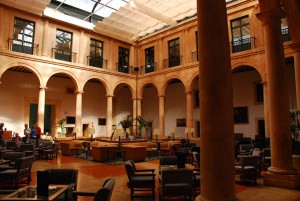 The spacious lobby bar on the ground level

During the Spanish Civil War the building was used as a prison. It is currently used as a parador. The palace has four towers at the corners, whose spires were also recovered after the restoration works. No palace could have more than two towers except those belonging to kings, but the Duke of Lerma was given this privilege due to his great powers in Court. 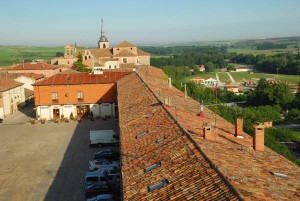 The view from room 401 west