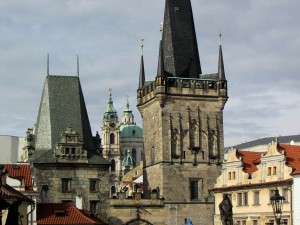 Towers on the west side of Charles Bridge, built in the 14th century, Prague

We will be visiting Prague in July as part of a two-week trip with a family of four from Arizona. Follow along on our adventures by saving our blog page as a favorite. 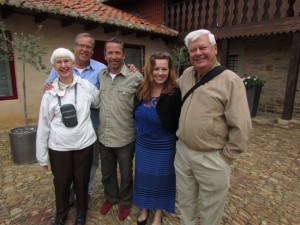 May 22 to June 6: Seventh trip for Art and Carol who toured with us most recently in Spain and Portugal in 2013. This time it will be other areas in Portugal and southern Spain with James and Jenean.
June 17 to 29: Dennis comes back for more family history research, this time in Denmark and Sweden plus a return trip to some ancestral villages in Germany that he visited in 2013. Dennis first took our business card at a genealogy conference in 1998. (James’ tour)
June 18 to 26: Family of four starting in Paris where they will meet Jenean, continuing on to Strasbourg, Lucerne and Munich.
June 28 to July 12: Tour with a family of four starting in London and continuing on to Normandy, Reims and on to Germany where we will retrace some of the steps taken by the parents of two of the members of this group during their time in Germany decades ago. The trip ends in Munich. This will be the first European Focus Private Tour for these Texans. Jenean starts the tour and James meets the group in Normandy.
July 16 to 28: Tour with a family of four from Tucson to Germany and Austria, the Czech Republic. This will be Tim’s third tour with European Focus. James will lead this tour.
August 5-13: A couple come for their first trip with European Focus in Germany, mainly visiting ancestral villages.
August 16-23: Two sisters come for a week in Germany including a visit with cousins in the Bremen area. Other highlights will include the Rhein River and Rothenburg ob der Tauber.
August 25 to September 5: John comes on his second tour with us, this time in England on a combination ancestral discovery tour and honeymoon. (James and Jenean)
September 22 to 30: Tour with a family of five, their first adventure with European Focus, to sites in Germany, Austria and Amsterdam in a mix of family history, World War II and ‘just for fun.’ James will lead this tour.
October 4 to 19: Pat and his wife come from Australia for their first tour with European Focus in Germany. Part of the tour will concentrate on family history and part will be slow travel tourism. Pat will meet with relatives in Berlin, who will travel there from Poland.
(James will lead this tour)
October 20: Mariane C. fulfills a lifelong dream of visiting the village of Appenzell, Switzerland. James will pick her up at her hotel in Lucerne and take her to nearby Appenzell for the day. The timing just works perfectly for this long-awaited journey. She will be ending a river cruise a few days before in Basel.
October 21 to November 5: Repeat guests Eric and Patricia return to Europe for a Grand Tour starting in Germany and passing through the Austrian Alps down through Italy, ending in Rome. This trip is a dream come true for Patricia, who has roots in Italy.
November 23 to December 3: A family of nine comes over to visit some Christmas Markets (starting on Nov 28) and other places of interest which the patriarch of the family enjoyed during his time in the service in the 1960s. This tour will be led by Jenean and James.

Available dates are in September plus the last part of October and first part of November for trips led by James or Jenean. For trips in Germany, Austria and Switzerland we can accommodate you through our partners, ask for available dates.