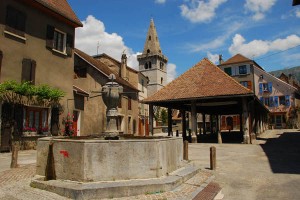 Following the recommendation of our hostess at Chateau du Paquier, we took the scenic drive to the hamlet of Mens the other day for our lunch. Jenean was back at the chateau cooking our dinner for that night, so it was Art and Carol and Jim wandering the quiet, in fact, deserted alleyways and streets of this pretty little town. 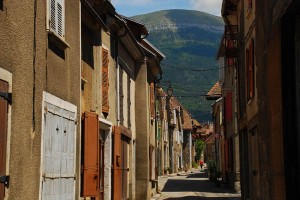 Want to enjoy a stroll without tourists or even residents? Go to Mens.

Mens is known as one of the refuges of the Huguenots. The Huguenots were members of the Protestant Reformed Church of France (or French Calvinists) from the sixteenth to the seventeenth centuries. Since the seventeenth century, Huguenots have been commonly designated “French Protestants”, the title being suggested by their German co-religionists or “Calvinists”. Protestants in France were inspired by the writings of John Calvin in the 1530s and the name Huguenots was already in use by the 1560s. By the end of the 17th century, roughly 200,000 Huguenots had been driven from France during a series of religious persecutions. They relocated primarily in protestant nations: England, Switzerland, the Dutch Republic, the German Electorate of Prussia, the German Palatinate, and elsewhere in Northern Europe, as well as to what is now South Africa and to North America. 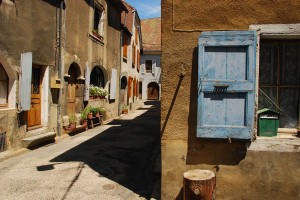 A sunny lane with the typical shutters found throughout this village and region.

The cemetery in Mens still has a wall dividing it in the center, one side for the Protestants, the other side for the Catholics.

We wandered the streets, took photographs and had a nice lunch at the Auberge in the center of the village before taking another scenic road back to the Chateau du Paquier for a lazy late afternoon before our dinner in the garden.