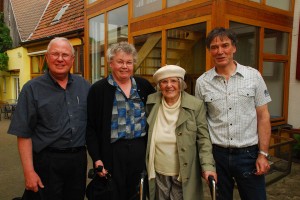 Thanks to a short article published in the local newspaper, Gini Packwood and her husband Bill were able to touch a letter written by Gini’s great-grandmother in 1923. The letter was sent to her sister, Elisabeth Graef, back in the village of Waldsee, Rheinland-Pfalz. Clara Graef Spindler had left this village suddenly many years prior, and was nearing the end of her life. She wrote about heart problems. She wrote about her concern for the social welfare of her former neighbors in Waldsee. She wrote about the differences between the “haves” and the “have nots,” and the unfairness of it all. She asked “please give a few potatoes to those really, really poor people around the corner.” Clara Graef Spindler died of her heart ailment four years after this letter was sent. The Weick family and especially the 90-year old granddaughter of the woman who received those letters in Waldsee now have some pieces of their own family puzzle fall into place, while Gini Packwood has a few leads to track down in America. Two photographs were sent earlier by Clara. One shows a young woman, the other a young boy. Who are these people? Are they the children of Clara Graef Spindler? Is one of them Clara herself as a much younger woman? 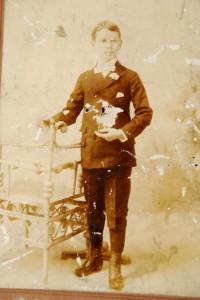 The young boy in the mystery photo sent from Minneapolis 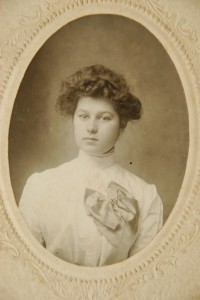 The young woman, who is she?