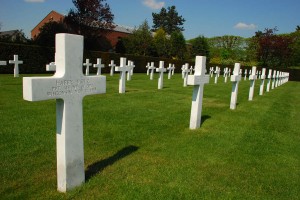 Crosses marking the graves of American soldiers near Waragem, east of Ieper

We spent half a day touring around the region of Ieper, Belgium the other day and it was quite and experience. WWI battlefields nearby still bear the scars of the turbulent months near the end of the war when thousands of men died in the Flanders Fields. Especially poignant is the fact that many thousands died within just days of the official end of the war on the 11th hour of the 11th day of the 11th month of 1918.

The medieval city of Ieper (Ypres) was totally destroyed by German artillery. The massive cloth hall, one of the largest of its kind in Europe, suffered massive damage along with the rest of the centuries-old houses and public buildings. And yet, to drive into Ieper today is to encounter a medieval town which is alive and expressive again of its rich past as a cloth trading capital. 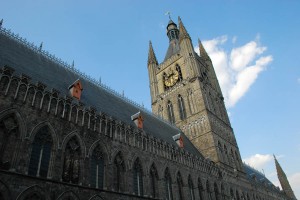 The moving Flanders Field Museum is located in the Cloth Hall

The excellent “Flanders Fields” museum located in the upper level of the Cloth Hall will close in November, 2011 for an extensive remodeling and expansion. We were lucky to have an hour or so there to experience the excellent displays of the horror of World War I. More than 55,000 men died in Flanders Fields alone. The nearby American cemetery is perfectly maintained by the American and Belgian governments, with more than 326 American dead buried there. As mentioned before, many of these men from Ohio, Michigan, New York and other places died within just days of the end of the “War to End All Wars.”  It is pointed out in the museum that since the end of WWI, the Red Cross and Red Crescent  have helped in a further 126 conflicts and that there has been a war going on somewhere in the world every single day since the 11th of November, 1918.

A visit to Ieper, Belgium is a “must see” for any World War One history buff or anyone who wants to experience the great sacrifices born by others a century ago. 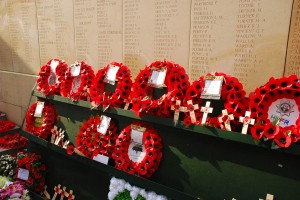 Memorials to some of the more than 54,000 men from all over the British Commonwealth immortalized in the tablets of Menin Gate, Ieper