Highlghts of this tour include:

Obidos, Portugal
Coimbra and the Estremadura
Oporto and the Duoro River Valley
Santiago di Compostela
The Pilgrims Route, on the Camino di Santiago
and much more 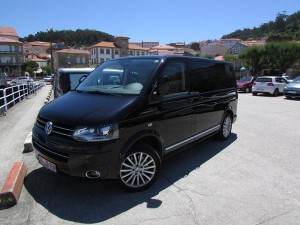 Our tour vehicle is a late model VW van.

Day 1: May 27
Arrival Lisbon International Airport
Departure on May 26 from Newark on UA # 64
Arriving in Lisbon at 8:20
Obidos, Portugal (1)

Jenean and Jim will spend the night of May 26 at a Radisson Blu hotel very close to the airport. They plan to clear it with management that you use their room, as Jim did when you arrived for your September-October, 2012 trip, to freshen up before we hit the road.

Knowing that you are usually fit and ready for a little sightseeing on your first day, we head for Sintra to check out one of the palaces there.

Later, after a nice lunch, we head over to Obidos, where we stay one night at a B&B.

We’ll stay two nights near Coimbra, a region known for colorful seaside villages as well as several “Border Castles” that were all built between 1279 – 1325 to keep Spanish incursions at bay. The Beiras has the highest mountain range in Portugal, the Serra da Estrela with some interesting features such as strange granite stone shapes that have been molded over time as well as a large waterfall that tumbles into a gorge.

We eat Roast Suckling Pig again in the town of Mealhada, which is well known for its Leitdo Assado (roast suckling pig).

We’ll headquarter at a “Quinta,” a working vineyard – the Quinta do Vallado – in the lovely setting that is the Duoro River Valley – more expansive views and plenty of opportunity to visit “Port Country” as well as an important wine production region of Portugal. The Duoro River is nestled down in a valley with high hills full of vineyards throughout. We are staying nearby.

Over the next days, exploration of Oporto, a city that has prospered from commerce ever since the Romans built a fort here, where their trading route crossed the Douro River. If there’s interest, we can certainly do some Port tasting and/or buying.

Minho Region
Explored while we are between primary locations, as well as day trip

We explore the Minho Region while we are between the primary locations of Santiago and the Duoro River Valley. On our drive up to Spain, we’ll take in one of Spain’s most scenic coastlines — -the Rias Baixas.

If time allows, we’ll check out the compact, historic center of Braga, the cathedral begun in the 11th Century and some of the lovely gardens of the former archbishops’ palace. Just outside of Braga is Portugal’s most spectacular religious sanctuary. This complex is called Bom Jesus do Monte.

We drive to Santiago de Compostela – the final destination for both ancient and modern pilgrims, headquartering at an old farm turned into a beautiful rural retreat. We can spend some time upon arrival scoping out the town and cathedral. The west front of the cathedral was covered by scaffolding when we were last here in May of 2011, and we are eager to see it without the obstruction.

We spend one day exploring A Coruňa and then meandering down the Costa da Morte. We can spend the rest of the afternoon leisurely exploring the majestic headlands of the Costa da Morte (Coast of Death) that gets its name from the many ships lost in storms or smashed on the rocks. The coast features seabird sanctuaries a quaint fishing village where women make bobbin-lace in the streets.

We depart for our next destination in the northern part of Castilla y Leon, in a village called Valderrey. We have a real treat for you with an interesting cultural experience in this gorgeous and rugged area as well as an extremely charming inn that we know you’ll both enjoy. It has great hosts, really good food, and beautiful views from their terrace and pool area, which is a new addition.

While in this area:
A visit to the town of Astorga, learning about the Maragatos people and then driving up into some of the high villages where there is still the typical Maragatos architecture and places where they lived and where their ancestors live to this day.

Back in the afternoon to relax by pool and then enjoy the hospitality of Arie and Willy.

Also:
Exploration of Las Medulas. Here is some information about Las Medulas, taken from Wikipedia:

“Las Médulas is a historical site near the town of Ponferrada in the region of El Bierzo (province of León, Castile and León,Spain), which used to be the most important gold mine in the Roman Empire. Las Médulas Cultural Landscape is listed by the UNESCO as one of the World Heritage Sites.
The spectacular landscape of Las Médulas resulted from the Ruina Montium, a Roman mining technique described by Pliny the Elder in 77 AD. The technique employed was a type of hydraulic mining which involved undermining a mountain with large quantities of water. The water was supplied by inter-basin transfer. At least seven long aqueducts tapped the streams of the La Cabrera district (where the rainfall in the mountains is relatively high) at a range of altitudes. The same aqueducts were used to wash the extensive gold deposits.
The area Hispania Tarraconensis had been invaded in 25 BC by the emperorAugustus. Prior to the Roman conquest the indigenous inhabitants obtained gold from alluvial deposits. Large-scale production did not begin until the second half of the 1st century AD.

We headquarter for the next two nights in Segovia. While here we make a daytrip, to visit the imposing grey palace of Felipe II’s, El Escorial (1563). Afterwards, we drive a short distance to then take in Valle de los Caidos (Valley of the Fallen) and its huge Holy Cross monument built by General Franco as a memorial for the fallen in Spain’s civil war. The cross stands at 490 feet and rises above a basilica carved 820 feet deep in the rock by prisoners.

Your Private Tour in Spain and Portugal

• Breakfast (at hotel) lunch and dinners are included in the price of your tour.
• Spacious double occupancy room with private toilet and shower.
• Transportation by full-sized van or similar
• Photography of what we see and do, presented to you on a CD and DVD in the fall/early winter of 2013.
• Incidentals, tolls, fuel, sightseeing entry fees for those attractions listed on your itinerary, tips or payments to local guides, etc.

It will be our pleasure to show you both a wonderful time in Northern Spain and Portugal.

Where We Will Stay

Near Coimbra May 28 and 29 (2 nights)
http://www.wonderfulland.com/villapedra/